The United Kingdom (UK) left the European Union (EU) on 1 February 2020 and will regain competence for its own international trade policy as soon as the transition period concludes at the end of 2020. Freedom to determine its own trade relationships was a major reason for the UK’s withdrawal from the EU: its new international trade policy is based on the goal of establishing ‘global Britain’, a country asserting that it is strongly committed to trade openness with international leadership.

To this end, the UK has concluded as many continuity agreements as possible, in order to roll over existing EU free trade agreements (FTAs), such as that with South Korea. It has also renegotiated, rather than simply roll over, the provisions of EU FTAs, with partners who so demanded, including Japan. Beyond those countries with EU FTAs to which the UK has been party, it has expanded the range of its FTA negotiations to Australia, New Zealand and the United States (US), three of its major trading partners. When it comes to geographic scope, the UK has set the Pacific as a high priority, its objective being to access the newly established Comprehensive and Progressive Trans-Pacific Partnership (CPTPP). In addition, the UK aims to use its advantage in digital trade and services to become a ‘world digital trade powerhouse’, and has stressed that FTA provisions should promote digital trade and foster regulatory cooperation in the field.

The EU represents 50 % of the UK’s total trade, and the UK economy is integrated with and reliant on the EU. Therefore, although the UK is facing obstacles in signing trade agreements, its new strategy has a number of implications for the EU. The UK is committed to remaining an open country with respect to international trade and its focus on digital trade and services, which depend less on geography, is seen as a way to diversify away from the EU.

Read the complete briefing on ‘UK trade agreements with third countries: Implications for the EU‘ in the Think Tank pages of the European Parliament. 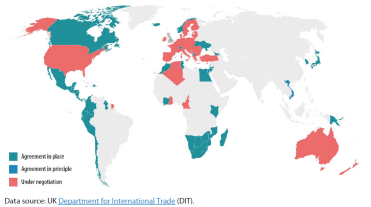 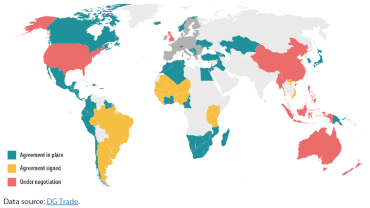