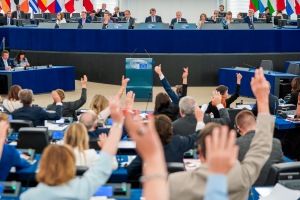 It is (almost) back to ‘business as usual’ as Parliament meets again in plenary from Wednesday 17 to Friday 19 June 2020. Members will deal with a full agenda, including up to three voting sessions each day, using the alternative electronic voting procedure introduced since the coronavirus outbreak, which has now proven to run smoothly.

On Wednesday afternoon, the session begins with Council and European Commission statements on the preparation of the European Council meeting of 19 June, at which the European Union budget and the proposed coronavirus recovery plan will be the focus of the agenda. Already under somewhat strained discussion, the coronavirus epidemic has further delayed the process of agreeing the new multiannual financial framework (MFF) for 2021‑2027. Parliament has already called on the Commission to propose a contingency plan for 2021, should the MFF, as seems increasingly likely, not be agreed in time. Nevertheless, Members will vote on Thursday afternoon on amendments to a Budget Committee report on guidelines for the 2021 Budget – Section III, the first under the yet to be agreed new MFF. Parliament’s guidelines on Section III are intended to assist the Commission by indicating political priorities for the deployment of next year’s EU budget; the recovery from the coronavirus crisis the most urgent, whilst Parliament will also seek to reinforce focus on the European Green Deal and digital transformation. Members will also vote on Wednesday night on two further draft amending budgets for the current year. Draft amending budget No 3/2020 concerns the over €3.2 billion surplus (mostly higher than expected revenues, and underspent expenditure) from 2019, which was carried over to 2020. While this surplus will reduce Member States’ gross national income contributions in 2020, Parliament is keen to see Member States devote the equivalent amount to support regions and businesses affected by the coronavirus crisis. To tackle the likely effects of the coronavirus crisis on the labour market, Members will also consider a proposal from the Commission to mobilise €345 000 to provide technical assistance that will strengthen the functioning of the European Globalisation Adjustment Fund on Wednesday night. The fund provides vital support for workers who lose their jobs due to structural changes in global markets. Members will also vote on Wednesday night on draft amending budget No 4/2020, to make €279 million available in the 2020 budget to assist regions in Portugal, Spain, Italy and Austria affected by natural disasters caused by extreme weather events in 2019.

Thursday morning’s session begins with debates on a statement by the Vice-President of the Commission/High Representative of the Union for Foreign Affairs and Security Policy on the foreign policy consequences of the Covid‑19 crisis. The virus has greatly exacerbated already deteriorating international relations on the one hand, and strengthened resolve on the other to support vulnerable regions in facing the threat to public health globally. In response, Parliament has already called for more strategic action, including updating the Global Strategy and supporting the Western Balkan countries, Africa and Latin America. At a time when the danger is real, access to reliable information is vital, yet the coronavirus epidemic has seen a corresponding worldwide outbreak of hoaxes, conspiracy theories, mis- and disinformation. In some countries, this has provided a pretext for restricting freedom of expression. Members will hear statements from the Council and the Commission on Thursday morning on tackling disinformation regarding Covid‑19, and the virus’s impact on freedom of expression. Parliament has already underlined that the issue presents a major public health problem, as well as the importance to democracy of a free and independent media. In advance of a Committee on Civil Liberties, Justice and Home Affairs report on media freedom, Members will vote later on Thursday on a proposal to set up a special committee on foreign interference in EU democratic processes. Members will also vote on setting up further special committees on the fight against cancer and on artificial intelligence.

Looking beyond the coronavirus pandemic, Members will hear Council and Commission statements on tourism and transport in 2020 and beyond on Wednesday evening and vote on a motion for resolution the following day. Here, the Commission has acted quickly to avoid the confusion seen at the beginning of lockdown measures, issuing guidelines to help Member States safely lift travel restrictions and support the badly affected tourism and transport sector. Members are likely to insist that the EU take more action and provide greater financial support for the sector.

Planned to provide a comprehensive reflection on the direction and organisation of the EU, Members will hear Council and Commission statements on the Conference on the Future of Europe on Wednesday evening. The Conference participants were to include citizens as well as representatives of Member State governments and Parliament and civil society. However, the Covid‑19 epidemic brought a halt to discussions between the EU institutions on the composition and structure of the Conference – and will inevitably have an effect on the proposed ‘Agora’ format. Nevertheless, keen to revive the discussions, Members will vote on a motion for resolution, which is expected to call for the Conference to be launched as soon as possible during the second half of 2020.

Returning to non-coronavirus related business on Wednesday evening, Members will debate a joint report from the Foreign Affairs and International Trade committees on recommendations on the negotiations for a new partnership with the United Kingdom following the 2016 ‘Brexit’ vote to leave the EU. The fourth round of EU-UK negotiations ended on 5 June 2020, with limited progress and critical divergence between the parties has emerged on level playing field commitments, fisheries, cooperation on criminal matters and the overarching institutional framework to govern future relations. The UK confirmed during the second EU-UK Joint Committee meeting on 12 June that it will not request an extension to the transition period, which will thus end on 31 December 2020. Parliament fully supports the Commission negotiating position, and the debate will be followed by a series of votes to agree Parliament’s position, with a final vote scheduled for Thursday.

Members will also vote on a motion for resolution on Thursday, following a statement by the Vice-President of the Commission/High Representative of the Union for Foreign Affairs and Security Policy concerning the PRC national security law for Hong Kong and EU defence of a high degree of autonomy for the people of Hong Kong. Parliament has already strongly condemned China’s increasing interference in Hong Kong, as well as its apparent willingness to abandon its commitments to uphold rights and freedoms under the Sino-British Joint Declaration of 1984.