On 24 September 2019, the Speaker of the United States House of Representatives, Nancy Pelosi (Democrat, California), announced the launch of an impeachment inquiry into President Donald Trump, the fourth President in the history of the United States to face the prospect of such an inquiry. The US Constitution provides for an impeachment process, but interpretations of the relevant clauses vary, creating controversy. 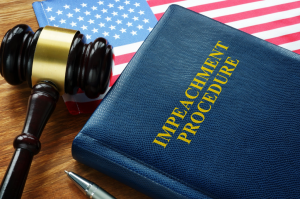 On 24 September 2019, the Speaker of the United States (US) House of Representatives (the House), Nancy Pelosi, announced the launch of an impeachment inquiry into the President, Donald Trump. The direct motivation for this decision was a whistle-blower’s complaint alleging that Trump had pressured the Ukrainian President, Volodymyr Zelenskiy, to investigate Joe Biden, a potential Trump rival in the 2020 presidential election, during a phone call on 25 July. On 25 September, the House passed resolution H.RES. 576: ‘Expressing the sense of the House of Representatives with respect to the whistleblower complaint of August 12, 2019, made to the Inspector General of the Intelligence Community’. The resolution demanded immediate transmission of the whistle-blower’s complaint to the Congressional intelligence committees. The bill was introduced by Representative Adam B. Schiff (Democrat, California), Chair of the House Permanent Select Committee on Intelligence, which oversees the US intelligence agencies.

Impeachment in the US Constitution

An impeachment inquiry is one of the many steps of the process of impeachment and removal provided for in the US Constitution. Inquiry (also referred to as investigation) is a political process preceding the possible House vote on the articles of impeachment provided for in the Constitution.
Article II, Section 4 of the Constitution states that the ‘President, Vice President, and all civil Officers of the United States, shall be removed from Office on Impeachment for, and Conviction of, Treason, Bribery, or other high Crimes and Misdemeanors’.

How does the impeachment process work? The roles of the House and the Senate

Article I, Sections 2 and 3 describe the impeachment process in the US Congress. As shown in Figure 1, while the House alone holds the power to instigate the process, the final vote to remove an official from office takes place in the Senate. Within the House, the impeachment process proceeds in three phases: (1) initiation of the impeachment process; (2) Judiciary Committee investigation, hearings, and mark-up of articles of impeachment (meetings to propose and vote on a draft bill ‘marking up’ the legislation before Committee members); (3) full House consideration of the articles of impeachment. Initiation can either take the form of a resolution calling for an impeachment (subsequently referred to the Committee on the Judiciary), or of a call for investigation of an official by a standing committee or a special committee for that purpose (subsequently referred to the Committee on Rules, which has jurisdiction over the authorisation of committee investigations). According to the Congressional Research Service, the 2019 process has proceeded on the basis of a third option, whereby, following the Speaker’s statement that the House is launching an ‘official impeachment Inquiry’, the House ‘might take the position that such an inquiry is already underway, and opt to allow its committees to continue their ongoing investigations or begin new inquiries using their existing investigative tools and authorities’. The Speaker’s statement directed six committees to proceed with the investigation, following which the Committee responsible may recommend a set of ‘Articles of Impeachment’ to the full House in the form of a simple resolution. If the articles are adopted, they are sent to the Senate for trial, presided over by the Chief Justice of the US (currently John G. Roberts, a 2005 Bush nominee). Although constitutional experts differ on whether the Senate is obliged to hold a trial, the current Senate Majority Leader, Mitch McConnell, has confirmed he would do so.

While the Constitution is sufficiently clear about who may be impeached and the process for doing so, there has been significant debate around permissible reasons for impeachment. Specifically, one can interpret ‘high Crimes and Misdemeanors’ in various ways. Academics have typically argued that this rules out impeachment ‘simply for incompetence or general unfitness for office […] It is a remedy for abuses of public office’. Yet, where one can choose to make this distinction for an individual case remains undefined. For instance, it is not clear whether an official must act with ill intention, or whether both private as well as public offences can be grounds for impeachment. One of the most contentious points is whether impeachment requires the literal breach of a US law. Certain experts have held that this is not necessary: ‘abuse of power, corruption and injury to the nation’ is enough. Yet, many take the opposite view, arguing that this interpretation is not ‘consistent with the text or spirit of the Constitution’.

Impeachment is in practice both a legal and a political process. Since the power of impeachment rests with
Congress, a politicised institution, it is natural that political calculations often affect the process. As former
US President Gerald Ford famously remarked, ‘An impeachable offense is whatever a majority of the House of Representatives considers it to be at a given moment in history’. Following the mid-term election of 2018, the US Congress is divided, with a Democrat majority in the House of Representatives and a Republican majority in the Senate. While Democrats alone fulfil the percentage requirement in the House to move to trial (51 %), Republicans hold only 53 of the 100 Senate seats, where a two-thirds majority is required. Even if all Democrat and Independent Senators were to vote in favour of impeachment, at least 20 Senate Republicans would need to find the President guilty for the latter to be removed from office.