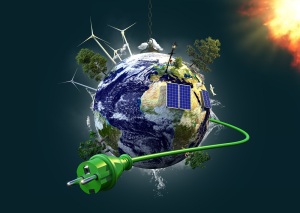 The European Union (EU) has developed many legislative measures related to climate change, and is on track to meet its 2020 targets for the reduction of greenhouse gas (GHG) emissions, the improvement of energy efficiency and the increased use of renewables. However, analysts estimate that more demanding targets in the medium- and longer-term require significant financial investments in mitigation and adaptation measures. Public resources can play an important role in financing such investment needs, not only directly but also in attracting funding from other sources.

In the broader field of EU finances, three main categories of climate-related initiatives can be identified: relevant projects and activities across a broad range of funding instruments in the EU budget; programmes for the demonstration of innovative technologies, funded by the EU’s Emissions Trading System; and climate finance from the European Investment Bank. While the EU budget represents only 2 % of public spending in the Union, it has features that can amplify its impact and make it particularly relevant for climate-related objectives, including the greater predictability of long-term investments ensured by its Multiannual Financial Framework (MFF).

In the 2014-2020 MFF, the EU decided to step up the contribution that the EU budget makes to action on climate change, by committing to spending 20 % of its financial resources on relevant measures. This political objective sets the broader framework for mainstreaming of climate in the EU budget, which consists of the incorporation of climate considerations and objectives across the major EU funding instruments. Climate mainstreaming takes place at different levels: a political objective and a tracking methodology for the overall budget; the design and implementation of specific funding instruments; and monitoring, reporting and evaluation, both for the overall budget and for specific instruments. Decision-makers and actors involved differ, depending on the phase.

According to the latest data, the EU should almost be able to reach the objective of spending 20 % of its 2014-2020 resources on climate by the end of the programming period. Some of the largest EU programmes under shared management with Member States are also the largest contributors to the climate target in absolute figures: agricultural funds, the European Regional Development Fund and the Cohesion Fund. However, some smaller instruments have significant climate-relevance.

Assessments of the tracking methodology and of its impact have identified both achievements and shortcomings. The creation of a broad political objective is deemed to have triggered ambitious work and a greater focus on climate. Climate spending in instruments such as the European Regional Development Fund and the Cohesion Fund has increased both quantitatively and qualitatively. However, other areas such as the common agricultural policy have not shown significant progress, despite the emergence of some good practices. Criticisms have included: the absence of a common mechanism to assign sub-targets to individual instruments; some inconsistencies in the methodology with over-estimations in some areas and under-representation in others; and a performance framework more focused on outputs than on results and impact.

The adoption of an overall objective for climate expenditure in the EU budget contributes to the establishment of a general framework against which to assess progress and areas for improvement in climate-related activities. For the post-2020 MFF, the European Commission has proposed to raise the objective to 25 % of the EU budget, while the European Parliament has called for an even more ambitious approach. Elements in the MFF proposals, such as the creation of some links to National Energy and Climate Plans, could reinforce the effectiveness of climate mainstreaming. The revenue side of the EU budget also has the potential to contribute to climate objectives, but its reform is considered extremely difficult due to the requirement for unanimity in the Council.

Read this ‘in-depth analysis’ on ‘Mainstreaming of climate action in the EU budget: Impact of a political objective‘ in the Think Tank pages of the European Parliament. 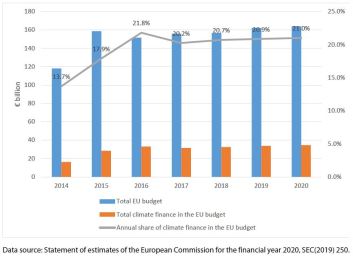 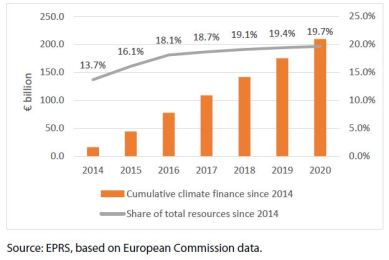