The power of the European Parliament

The only directly elected European Union (EU) institution; the European Parliament’s (EP) power and influence in pursuit of citizens’ interests have evolved significantly, transforming it into a full-fledged legislative body and forum of discussion and engagement at the heart of representative democracy, whose influence is felt in virtually all areas of EU activity.
What are then the European Parliament’s main powers?

What difference does the Parliament’s work make to how Europeans live their lives? This series highlights some practical examples of EP impact during the 2014-2019 legislative term.

At the beginning of 2016, two in three cross-border shopping attempts in the European Union were still failing because of unlawful geo-blocking practices preventing online customers from accessing and purchasing a product or a service from a website based in another Member State, or automatically re-routing them to a local site with different conditions applicable. In November 2017, the EU institutions agreed a new regulation banning unjustified geo-blocking and discrimination practices to foster e-commerce and cross-border access to goods and services in the EU.

The European Parliament has been instrumental in forging the comprehensive and balanced legislation that is applicable since December 2018. Online traders are today prohibited from blocking or limiting access to online interfaces and from re-routing online customers to a different website without their consent for reasons related to the nationality, place of residence or place of establishment of the customer. Furthermore, geo-blocking practices are banned (i) when customers buy tangible goods (e.g. clothes) online to be delivered or collected at a specific location, (ii) when they receive electronically supplied services (e.g. cloud services, web hosting), or (iii) when they receive a service outside their place of residence (e.g. hotel booking, car rental). In these situations, online sellers cannot discriminate between customers on the basis of their nationality or place of residence, for instance by blocking some customers on the basis of their IP addresses or charging additional fees to customers from different Member States.

At the insistence of the European Parliament, the regulation clarifies that the regulation is not a one-size-fits all law, and that, in objective circumstances, online traders remain free to differentiate between customers on a specific territory within a Member State or to specific groups of customers on a non-discriminatory basis.

Parliament also had considerable influence on setting the conditions of revision of the regulation. As proposed by the European Commission, the regulation excludes from its scope services provided in various sectors including financial, transport, electronic communication and healthcare. Furthermore, in line with the traditional territorial protection of copyright, the new regulation does not apply to audio-visual services. Less stringent rules are also imposed on non-audiovisual electronically supplied services protected by copyright (such as ebooks, online games and online music) for the time being. However, after lengthy negotiations, Parliament’s negotiators achieved the inclusion in the regulation of a more stringent review clause requiring the Commission to assess (within two years of the entry into force of the regulation and then every five years) whether to extend the new rules to all services, including digital content and audiovisual services subject to copyright protection.

The review clause enhances the Parliament’s oversight of the implementation of the new rules, with the Commission being required to report on the evaluation of the regulation and to amend the geoblocking rules in light of legal, technical and economic developments – especially the increasing expectations of consumers for accessing copyright-protected services. Importantly, at the express request of the Parliament, a very detailed ‘Statement by the Commission’ committing it to perform a substantive and reasoned analysis of the feasibility of amending the regulation already by March 2020, was annexed to the published legislation. This could give the Parliament leverage to push for banning unjustified geoblocking and discrimination practices arising in the field of copyright-protected services including audiovisual services. 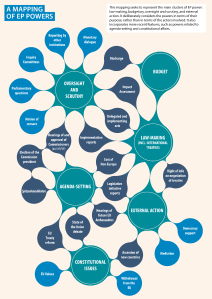 a mapping of EP powers

The latter procedure consists of the joint adoption of an act by the European Parliament and the Council on the basis of a proposal by the Commission. Here, both legislators need to agree on an identical text before it becomes law, which may take up to three readings in each of the two institutions. On average, it takes about 22 months for legislators to agree on a legislative file, starting from the Commission proposal until the signature of the final act.

The number of areas in which the Parliament co-legislates has expanded greatly over time and now includes the EU internal market, environment, consumer protection, food safety, regional development, agriculture, transport, energy and many others. Indeed, most legislative acts are now adopted following the ordinary legislative procedure.

Besides the power of consent with regard to legislative acts, the Parliament’s consent is required in many other instances not related to legislative acts in the strict sense. For example, it is needed before any new country joins the EU (Article 49, Treaty on European Union, TEU), but also before any withdrawal treaty can be concluded when a country decides to leave it (Article 50 TEU). The Parliament’s consent is also required before concluding agreements with third countries, for example association agreements, as well as before the Council determines that an EU Member State is breaching – or is about to breach – EU values (Article 7 TEU).