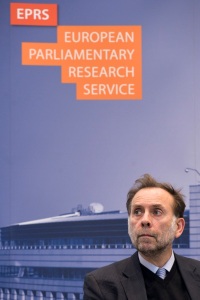 On 8 May, the eve of the anniversary of the Schumann Declaration, the European Parliamentary Research Service animated the Library reading room with a fascinating conversation between Koen van Zon, presenting his doctoral research findings on the Parliament of the 1950s and 1960s for Radboud University Nijmegen, and Martin Westlake, currently Visiting Professor at the College of Europe and the London School of Economics.

After a warm welcome, EPRS Director General, Anthony Teasdale, introduced the lecture’s core question: whether there is a resilient European Parliament ‘DNA’ – that is, an ensemble of behavioural inclinations intrinsic to the nature of this institution since its first inception.

Rather than undertaking an historical analysis of the Parliament’s life story, Van Zon took a more diachronic approach. Indeed, when retracing the main determinant events in the Parliament’s history, the author underlined how these three behavioural attitudes were already and simultaneously at work in the process of becoming a European Parliament. In particular the customary strategy (i.e. ‘don’t try to change the rules, change the costumes instead’), came to constitute the Parliament’s modus operandi in its ambition to obtain the attributes of any other liberal democratic parliament: direct elections, budgetary and legislative power.

Van Zon noted that, since its very inception in 1952, the Common Assembly was already ‘claiming to speak on behalf of the people’. When asked by Adenauer to draft a ‘constitution’ laying the foundations of a political community, there was no clear legal foundation for the Common Assembly to function as ‘constitutive assembly’. However, it was exactly by a customary strategy, in their interpretation of the treaty base, that the Members, most of whom were experienced constitutionalists, could act to realise a more ambitious mandate.

The first meeting, in 1958, of the newly formed Joint Assembly of the three European Communities, is another example of the Members’ ambition to ‘change the rules by changing the costumes’. Indeed, their first approved resolution was to rename the Common Assembly as the ‘European Parliamentary Assembly’, that is, in Van Zon’s words, ‘to call themselves a Parliament’. Furthermore, regardless of the Council’s non-recognition of this very symbolic name, the Members continued to operate under the name of ‘European Parliamentary Assembly’ until the name was formally recognised in the 1987 Single European Act.

The first direct election in 1979 has long been interpreted as a ‘turning point’, marking an irreversible shift in the life of the institution. However, as Van Zon and Professor Westlake argued, this event was simply the accomplishment of a long process. Direct elections can therefore be seen as an extraordinary event in the process of the Parliament’s efforts ‘to start acting’ as a transnational, rather than an international, assembly. They are the result of almost 30 years of Members’ contribution to setting the European agenda, claiming to ‘speak on behalf of the people’, and renaming their assembly the European Parliament. Van Zon outlined that these direct elections represented an impetus for Parliament to become a stronger, cohesive, efficient and legitimate body.

Van Zon underlined that his analysis dispels the myth of a powerless and fragile institution, preparing itself for an incumbent electoral disaster. Van Zon noted that, in his opinion, if Parliament’s powers may have seemed rather opaque to the public in the past, the Spitzenkandidaten procedure is one way in which the lines of Parliament’s accountability are becoming more evident. Indeed, Van Zon indicated the extent to which the lead candidate procedure demonstrates the last example of Parliament’s ‘DNA’ behavioural attitudes at work:

Professor Westlake and Koen Van Zon’s lecture made a strong case for the existence of a Parliamentary ‘DNA’ that, since its very inception and well before direct elections, has provided proof of unprecedented resilience. If today radical or eurosceptic parties are no longer excluded from Parliament (as was the case in the past), their presence will not ‘bring the house down’. On the contrary, Van Zon argued that the Parliament is and always has been strong enough to uphold the democratic promise to welcome dissent at the very heart of democracy. This will strengthen, rather than damage, such a ‘genetically resilient’ institution.