The European Union lags behind the United States and China in fostering disruptive technology and needs a policy overhaul to catch up with, or even leapfrog, its rivals. Spending on research and development by the EU and its Member States should be streamlined, more agile and, above all, funds should be disbursed much faster than at present, notably to start-up companies. A risk-taking bias should replace a sometimes over-cautious attitude on the part of programme managers. These were some key messages from analysts and industry practitioners speaking at a conference on ‘Harnessing disruptive technologies: Converting EU research into successful start-ups’, organised by the European Parliamentary Research Service (EPRS) on 10 July 2018 in the European Parliament’s Library Room.

‘The EU, and indeed the Member States, spend a lot of money on promoting research of various kinds, and the question is how to make sure that as much of it as possible can be commercialised in a way that adds over time to GDP. There is a general perception that Europe is less successful than some of its competitors in doing so,’ said EPRS Director-General, Anthony Teasdale, opening the debate. 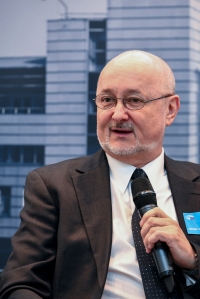 Indeed, the EU is good at funding basic research and incrementally improving traditional engineering-based industries, but its achievements in information technology, artificial intelligence and creating the environment for innovative start-ups to flourish is less impressive, said Dr Alexander Waibel, Professor of Computer Science at Carnegie Mellon University, Pittsburgh and the Karlsruhe Institute of Technology, Germany. ‘Europe is doing a fantastic job in basic sciences, fundamental research programmes in physics, chemistry and human brain projects. We have companies that are the envy of the world, manufacturing products of a quality that no one can match’, he said.

However, ‘future growth and the economy’s ability to create jobs lies elsewhere’, Waibel added. ‘Disruption is absolutely key for society. Famous investor, Warren Buffet, once said: first come the innovators, then come the imitators, and then come the idiots. Uber, Google, Apple Facebook, they all in some way disrupted the way we do things and now dominate the market.’

The EU is spending considerable sums on research and development as part of its GDP. In Germany, the ratio is higher than in the USA.

However, André Loesekrug-Pietri, former venture capital investor and then adviser to the French government, noted that no European company is among the world’s 10 top firms in terms of market capitalisation. The market capitalisation of the seven largest platforms (four American, and three Chinese), is four times higher than the same parameter for the 30 biggest German and 40 largest French companies. China accounts for 48 % of investment in artificial intelligence, the US for 38 %, and the rest of the world, including the EU, for 14 %. This is because the current IT-based economy creates a ‘winner takes all’ market for the best conceived disruptive innovations.

To be able to compete in this area, the EU and its Member States need to reform their system of awarding research grants. ‘We are too much focused on research papers. No venture capitalist is interested in research paper, we need prototypes,’ said Loesekrug-Pietri. In the current, fast-changing world, speed is of the essence. Project submissions should be 10 pages long, rather than 120, as is the case at present, and reviewed in six weeks by temporarily hired scientists acting as project managers, rather than by civil servants. A winner would receive funding swiftly, but it would face tough regular scrutiny on progress.

This is how the major US innovation incubator, the Defense Advanced Research Projects Agency (DARPA) works. DARPA is responsible for the development of emerging technologies for military and later civilian use. With a current budget of some $3.4 billion, it has 240 employees. DARPA was responsible for inventions such as the internet, global positioning systems, or driverless vehicles. Waibel listed some commandments for a DARPA-destined project. An applicant needs to answer questions as to: what they are trying to do, without any jargon; what the limits of current practice are; who cares if you are successful; what the risks and payoffs are; how much it will cost; how long it will take to implement; what the ‘mid-term and final exams’ for success are.

Both Waibel and Loesekrug-Pietri agreed that creating a European DARPA is worth considering, although the former advocated a pan-EU approach, while the latter said a few most committed countries should first launch the project. Loesekrug-Pietri is now the speaker of the Joint European Disruptive Initiative (JEDI), a private-public project aimed at accelerating French and German leadership in disruptive innovation.

The EPRS’ Head of the Scientific Foresight Service, Lieve Van Woensel, stressed that the EP attaches great importance to innovation, and its members are well briefed on the issue, to address the numerous concerns of ordinary people regarding the speed of technological change.