The event was part of the series on the future of EU. 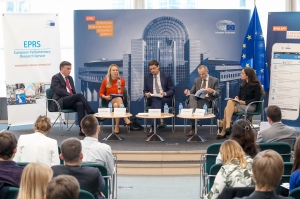 Speakers including David McAllister (EPP, Germany), Chair of the AFET Committee, Julia de Clerck-Sachsse (Adviser, Strategic Planning Division, EEAS), Tomáš Valášek (Director, Carnegie Europe) and Elena Lazarou (Policy Analyst, EPRS), as well as moderator Alexandre Stutzmann, Director of Committees, DG EXPO, joined the EPRS on 15 May 2018 for a roundtable event entitled ‘Roadmap for the Future of Europe: shaping EU Security and Defence Policy’. The event was held in the European Parliament’s Library and was the occasion for the launch of a new EPRS publication on ‘Peace and Security in 2018 – Overview of EU action and outlook for the future‘, which will be updated annually and which complements the existing annual publications on the Economic Outlook for the EU and the Demographic Outlook for the EU.

In his introductory keynote, David McAllister referred to the topic as a very timely one. In the past two years, the EU’s Member States have begun for the first time to put words into action in the area of security and defence. Looking back to the Bratislava Summit of 2016, which followed the Brexit vote and aimed at breathing new life into the EU integration process; one area of priority EU action was Security and Defence. This meant moving to the implementation of the Global Strategy and of the EU-NATO Joint Declaration. David Mc Allister identified three decisive factors in the EU’s decision to move ahead in the area of defence: the EU’s defence efficiency problem; improving EU-NATO relations to an unprecedented degree; and external factors such as the growing pressure on the international rules-based system and the shifting of economic and political power globally. He discussed ongoing challenges, such as Russian aggression, cyber threats and interference with elections, as well as the changes in United States’ foreign policy, and perceived those challenges as ‘push’ factors for European integration in defence. Permanent Structured Cooperation in defence (PESCO), implemented through projects such as Military Mobility, is perhaps the most illustrative example of this move towards integration. He also highlighted that the next challenges for PESCO will be arrangements on financing and governance, which will be discussed in the European Council in June 2018. The developments we have witnessed, such as PESCO and the European Defence Fund, led David McAllister to express optimism about the future, based on the fact that, contrary to the situation in the past, political will has emerged that could give rise to a new momentum. He ended his speech by reiterating the European Parliament’s call for an EU Security and Defence White Book, with more details and specifications on the implementation of the Global Strategy. 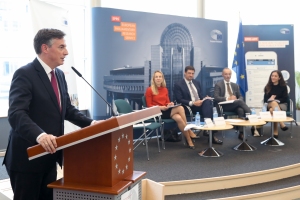 In the subsequent roundtable, experts discussed the challenges ahead for the EU’s security and defence policy, such as relations with NATO, implementing decisions and managing to keep up with the pace of events. The discussion also focused on the Global Strategy and how it translates into action, including in terms of the objectives set in Bratislava, but also with regard to the identity of the EU as a global peace and security actor. It was highlighted that security and defence is one of five priorities in the Global Strategy that include resilience, an integrated approach, a focus on prevention, regional orders and strengthening the multilateral order and global governance making it more inclusive and sustainable. That the multilateral rules-based order is being challenged today was a recurrent theme of discussion, and the EU’s need to work with partners on this was highlighted. The role of media and public perceptions of peace, security and the global environment was also emphasised as a source of anxiety about the future of the international system.

On the particular issue of PESCO, experts agreed that the combination of political will and the specific process that it represents, coupled with external factors (fragility, crises, a confrontational global environment), are encouraging. PESCO is also putting pressure on governments to spend more on defence and defence innovation, something which is needed in the EU. However, finding a compromise in the ambitions, interests, threat perceptions and capacities of Member States, is bound to be the major challenge ahead. Nevertheless, within an environment which is becoming increasingly unstable, this is a challenge – experts agreed – to be dynamically tackled.