On 30 January 2018, following the publication of our study on the Economic and Budgetary Outlook for the European Union 2018, the EPRS organised a policy roundtable in the Library of the European Parliament. This second edition of the annual study presents an overview of the main economic indicators in the EU and euro area and their two-year trends. Furthermore, the publication explains the annual EU budget, its main headings for 2018, and sets out the discussion around the next Multiannual Financial Framework (MFF), starting in 2021. A special ‘economic focus’ in 2018 provides a bird’s eye view of industry and an overview of industrial policy in Europe. 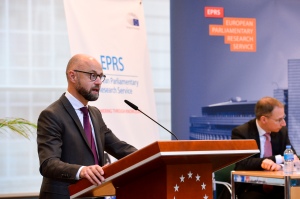 Following introductions by Etienne Bassot, Director of the EPRS Members’ Research Service and Fabia Jones, acting Head of the Budgetary Policies Unit, the roundtable discussion was opened by Jochen Andritzky, the Secretary General of the German Council of Economic Experts. He presented main findings of the 54th edition of Council’s report on economic policy in the EU, underlining that the current economic upturn is broad-based and covers most Member States. Taking a more historical perspective, he also added that since the beginning of the present century some countries have gained in competitiveness, while others have lost. As an effect of the crisis, public debt has risen and has not really diminished. However, in this environment of low interest rates, the costs of debt refinancing for governments have decreased, fiscal policy has been expansionary, and large savings have been generated. This creates good conditions for the necessary euro area reforms, which should focus on lifting growth, improved resilience and better shock absorption. Focusing on this last dimension, Andritzky mentioned that monetary shock absorption in the EU is not less than in the USA, but is different, as there is no common fiscal capacity. He also suggested increasing surveillance in the framework of the European Stability Mechanism and introducing rules for orderly restructuring of the sovereign debt as possible steps to strengthen the crisis mechanism. According to Andritzky, pragmatic rather than revolutionary steps are the preferred way to proceed. These include simplified fiscal rules; creation of a Euro Finance Minister; reform of the EU budget; an increased European Fund for Strategic Investment; development of sovereign bond-backed securities; closing the gaps in the Single Resolution Mechanism; harmonising insolvency rules; introducing a European Deposit Insurance Scheme; and continuing the work on both the banking and the capital markets Unions. 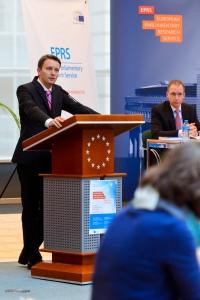 Member of the European Parliament, Siegfried Mureşan (EPP, Romania), a Vice-Chair of the Committee on Budgets, continued the discussion, highlighting that the current Multiannual Financial Framework was agreed in 2013 and many unanticipated challenges, such as migration crisis and terrorism threats, have since created a situation in which more needs to be done with limited resources. A new MFF needs increased flexibility and to balance previous priorities such as cohesion and agriculture, which form the biggest part of EU budget, with new objectives such as fostering innovation, the digital economy, and mitigating the refugee crisis. He underlined that efficient absorption of the funds will remain of fundamental importance and that Brexit, which had no implications for the 2018 budget, will create uncertainty and unpredictability from next year. The EP has set its political priorities for 2018: creating growth and jobs, and the safety and security of EU citizens. Parliament therefore prioritises investment in infrastructure, the digital economy, SMEs, and measures to tackle youth unemployment, as well as boosting the role of agencies with competences in justice and home affairs such as Europol and Frontex. Siegfried Mureşan also discussed efforts to encourage defence research at the EU level, since this creates economies of scale and allows the Member States to share benefits. Furthermore, he argued that the EU’s neighbourhood policy is crucial for Europe’s security. Continuing with the 2018 budget, Mureşan mentioned that the Commission proposed a satisfactory draft budget, increasing spending on crucial initiatives such as the Connecting Europe Facility, Erasmus and Horizon 2020. However, despite adopting similar political priorities to those of the EP, the Council proposed significant cuts to the budget. In the negotiations, the EP was able to increase resources in the identified priority areas, in some cases setting appropriations at a level higher than the initial Commission proposal.

The floor was then taken by Alessandro D’Alfonso, a policy analyst with the Budgetary Policies Unit, who is currently an EU Fellow at the European University Institute (EUI) in Florence. He put the EU budget in perspective, noting that it is rather limited, constituting less than 2 % of total public spending by governments in Europe and less than 1 % of Gross National Income (GNI), but that it has features that can amplify its impact. The current MFF was agreed in the aftermath of the financial and economic crisis, when staying within the limit of 1 % of GNI was seen as a major objective by many stakeholders. The situation appears different today, however, with new challenges demanding budgetary responses, and Brexit looming, which is reported to threaten a €12-15 billion gap in the budget every year for the next MFF. Commissioner Günther Oettinger proposes to bridge this gap through both cuts and by adding fresh resources. The reform of the MFF is likely to be carried out according to the principle of focusing on areas with highest EU added value, with allocation of resources based on criteria such as Treaty objectives and obligations, public goods with an EU dimension, economies of scale (e.g. in development policy) and subsidiarity. D’Alfonso highlighted that further simplification of the EU budget can contribute to increasing efficiency, effectiveness and focus on results, while ensuring a smoother transition between programming periods. Measures in this direction could include a simpler set of rules and stronger protection of the EU budget through the new European Public Prosecutor’s Office. It had been necessary, due to the crisis, to create a number of instruments outside the EU budget, which may now require streamlining. Reform of the MFF will also seek to strengthen the flexibility provisions, while providing predictability for investments. On the income side, reform options for the own resources system will be considered. Regarding the timeline, the European Council will meet in February, two European Parliament resolutions are expected in March, and the Commission proposals in May will open the way ahead for the negotiations.

See also ‘Economic and Budgetary Outlook for the European Union 2018‘.

The final speaker was Grzegorz Drozd from DG GROW of the European Commission who highlighted the importance of EU industry, underlining that it provides employment for 32 million Europeans, and 68 % of EU exports. Industry has also created 1.5 million jobs since 2013, confirming that it is on a steady path of recovery from the crisis. New phenomena shaping today’s industry include the process of converging technologies known as industry 4.0, servitisation, and new demands from consumers. Looking at global performance, EU industry is in sixth place in terms of innovation, just behind the United States, but is lagging behind the Asian economies in areas such as absorption of digital technologies. Drozd mentioned that industrial policy in the EU is not based on a single piece of legislation, but rather it is mainstreamed through various policy fields. However, following multiple calls from stakeholders, including from the EP, the Commission adopted its industrial policy strategy in September 2017. Drozd explained the six pillars of the strategy: single market and people, digital technologies, low carbon and circular economy, investments, supporting industrial innovation on the ground, and the international dimension. In order to improve governance, the Commission proposed creating a High-Level Industrial Roundtable, which will provide feedback on current policy actions and reflect on future targets. To conclude, Drozd underlined that close cooperation between and the involvement of all the stakeholders is crucial to the success of the new strategy.

The roundtable discussion was followed by a short Q&A session.