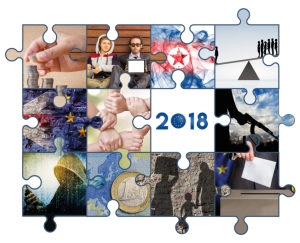 On 29 March 2017, the UK Prime Minister, Theresa May, notified the European Council of the UK’s intention to withdraw from the EU, thereby triggering a two-year deadline to reach a withdrawal agreement. The UK would also leave the EU single market and customs union, and seek a comprehensive free-trade deal with the EU. A month later, the European Council (EU-27) adopted guidelines for negotiations with the UK, setting out a phased approach. In a first phase, talks would focus on three priority issues: EU and UK citizens’ rights; a financial settlement; and the situation of Northern Ireland. A second phase, to start when ‘sufficient progress’ had been made on the first, would address the framework for future EU-UK relations and, as later requested by the UK, transitional arrangements. On 8 December, after six rounds of talks, agreement was reached on the priority issues, allowing the European Council to decide that sufficient progress had been made to move to the second phase.

Timeline: Negotiations need to be finalised by autumn 2018, to allow time for the withdrawal deal to obtain the consent of the European Parliament, and UK parliament approval, so that UK membership can end on 29 March 2019. The EU-27 and the UK could extend this deadline by common agreement.

Common understanding on the key issues of the withdrawal agreement

On 8 December, the EU and UK announced agreement in principle on the main issues for the withdrawal, set out in a joint report. These could still be adapted to possible transitional arrangements and are without prejudice to discussions on the future EU-UK relationship.

Next steps: transition and future framework for EU-UK relations

The European Council (EU-27) decided on 15 December, on the basis of the Commission’s recommendation, that sufficient progress had been achieved to move onto phase two. New guidelines call on the negotiators to start drafting the withdrawal agreement, based on the joint report and talks on other separation issues. They also make clear that progress in the second phase is contingent upon fully respecting the commitments made in the first.

The transitional arrangements, to be clearly defined and limited in time, will be part of the withdrawal deal, and underpinned by the following principles: i) the UK will remain in the customs union and the single market, but will not be represented in the EU institutions; ii) the entire EU acquis (including changes made during the transition period) will apply to the UK, together with ‘all existing Union regulatory, budgetary, supervisory, judiciary and enforcement instruments and structures’; iii) the UK will respect its obligations arising from the single market’s four freedoms and the customs union. The Council will adopt negotiating directives on transitional arrangements in January, based on a Commission recommendation.

On the future framework for EU-UK relations, the European Council stated its willingness to begin preliminary talks to identify a common understanding, which would take the form of a political declaration accompanying the withdrawal deal, since an agreement can only be concluded once the UK becomes a third country. However, discussions on trade and other areas of cooperation, such as counter-terrorism, security, defence and foreign policy, will only begin after additional guidance has been agreed in March 2018. Preserving the integrity and proper functioning of the single market and avoiding disrupting relations with existing third-country partners will be key for the EU. While internal preparatory discussions are continuing within the EU, the UK still needs to clarify what type of trade deal it seeks.

What type of economic and trade deal?
In the EU’s view, by ruling out participation in the EU single market (based on the model of the EEA/EFTA countries), the UK is left with the option of a EU-Canada type trade deal (CETA). However, market access for services is limited under CETA. A ‘Canada plus-plus-plus’ option – meaning ‘Canada plus the best of Japan, the best of South Korea and … services’ – has been advanced by the UK chief negotiator. Experts have also mentioned an association agreement, modelled on the EU-Ukraine deal. It would provide for a deep and comprehensive free trade area, and for political cooperation on foreign policy or counter-terrorism. A no-deal scenario, with trade on WTO terms, seems a remote possibility now, but the one with the most damaging economic consequences, particularly for the UK.

The Parliament, whose consent is required for the conclusion of any withdrawal deal, has adopted three resolutions on the negotiations with the UK, on 5 April 2017, 3 October 2017 and most recently, on 13 December 2017. In the latest, the Parliament called for the commitments made in the joint report to be fully respected and translated into legal terms, as a prerequisite for future progress. It also set out five outstanding issues to be addressed further. Finally, the Parliament reiterated that the full EU acquis and all EU oversight instruments and structures must apply to the UK during any transition.

Read the complete in-depth analysis on ‘Ten issues to watch in 2018‘ on the Think Tank pages of the European Parliament.