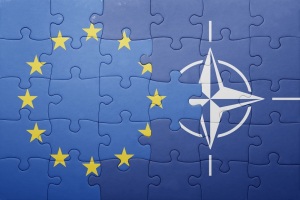 The concept of hybrid threat has gained traction in relation to Russia’s actions in Ukraine and the ISIL/Da’esh campaigns going far beyond Syria and Iraq. Faced with this constantly evolving challenge, the European Union and NATO have taken several steps to strengthen their respective capabilities and pursue common objectives through closer cooperation. The EU-NATO joint declaration adopted in July 2016 in the margins of the Warsaw NATO Summit represents a clear step forward in this regard. The document outlines new areas for practical cooperation, in particular with regard to hybrid threats, building resilience in cybersecurity, and strategic communications.

The Council conclusions of 6 December 2016 stressed that the implementation of the joint declaration is a key political priority for the EU. It welcomed the progress achieved in advancing EU-NATO relations, including implementing and operationalising parallel procedures and playbooks for interaction in countering hybrid threats. With a view to ensuring further progress, the Council endorsed a common set of proposals focused on better coordination, situational awareness, strategic communication, crisis response, and bolstering resilience. The North Atlantic Council endorsed the same set of measures. Reports on implementation, including possible suggestions for future cooperation, should be provided on a biannual basis from the end of June 2017.