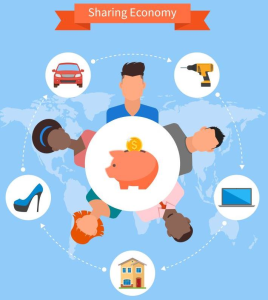 In recent years, a major evolution has begun to reshape the capitalist economy. Today, no-one can say with certainty to what extent the ‘sharing economy’ will change the economic landscape. Yet, the speed, dynamism and scale of the change seem to point to a substantial long-term trend. What is at work here is a transition from traditional individual ownership of most assets towards accessibility-based economic models, which can be observed across a wide and increasing variety of markets.

Two trends can be observed in the evolution of this rental-like model. Firstly, technological progress allows this new business model to spread to more and more markets and become more and more convenient and flexible. Secondly, there is a shift to a peer-to-peer accessibility-based business model, centred on companies that operate through an online platform or marketplace that connects consumers owning certain assets and skills with consumers in temporary need of them.

There seems to be no consensus at EU level on either the name or the definition of these new economic models: while some institutions have chosen to call the phenomenon the ‘collaborative economy’, others prefer to refer to the ‘sharing economy’. This is the case, in particular, of the European Parliament, and for the purpose of this study, the sharing economy will be defined as ‘The use of digital platforms or portals to reduce the scale for viable hiring transactions or viable participation in consumer hiring markets (i.e. ‘sharing’ in the sense of hiring an asset) and thereby reduce the extent to which assets are under-utilised.’

The scope of this study thus includes activities providing access to the following goods and services: accommodation, transport, consumer durables, labour and human capital, intellectual property and professional services. It should be noted that finance falls outside this scope of this study.

In any case, the sharing economy emerges as a complex issue. Beyond the problem of the definition itself, this type of activities raises a number of important and controversial questions in the economic, as well as in the social and environmental fields. Additionally, it remains difficult to predict its development and future with certainty. The dazzling start of this new economy may give hope for a brighter tomorrow; some indeed do not hesitate to predict tremendous growth rates and a windfall of benefits. Others are wary of the speed and magnitude of the success of the sharing economy, expressing doubts at the long-term nature of this development and warning of a disappointing slowdown.

In order to provide a comprehensive picture, this study addresses these issues at three levels:
– firstly, it attempts to evaluate the economic and social potential of the sharing economy in the European Union.
– secondly, it seeks to identify whether there are obstacles or barriers preventing the sharing economy from reaching its full potential, and if so, the economic impact thereof.
– Finally, it analyses the effectiveness of the existing EU regulatory framework in promoting and overseeing such emerging business models.

Its main findings are as follows:

1) The nature of the sharing economy is likely to change over time as it grows in scope and matures. Consumers are likely to benefit from lower prices and an increased quality of services. Providers will enjoy new economic opportunities, but may not benefit from the other advantages associated with traditional employment. Manufacturers may need to adapt to a market, in which fewer goods, but of higher value, are consumed. Moreover, other policy priorities are also likely to be affected by the sharing economy: its growth could eventually lead to a reduction in income and wealth inequality. At the same time, however, its development could potentially trigger the creation of new forms of ‘social exclusion’, such as the exclusion of an individual/provider from the sharing economy business due to e.g. poor ratings.

2) The potential economic gain linked with a better use of capacities (otherwise under-used) as a result of the sharing economy is estimated at €572 billion. This amount is theoretical, in so far as substantial barriers currently prevent the full benefits from being realised.

3) The current regulatory framework would in principle allow the sharing economy to continue growing, but will not enable the best feasible results to be met in the medium term. Maximising the potential of the sharing economy would thus require new initiatives at European Union level.

The set of recommendations listed at the end of this study suggests the additional steps which ought to be taken at the EU level in order to achieve the full economic potential of the sharing economy. In doing so, policy-makers should seek to ensure an adequate balance between creative freedom for business and the necessary regulatory protections.