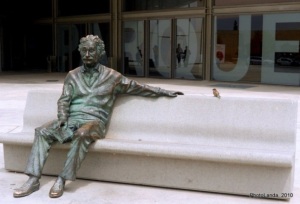 The ‘MEP-Scientist Pairing Scheme’, run by the European Parliament’s Science and Technology Options Assessment (STOA) Panel, aims at promoting a culture of science-based policy-making by helping create lasting links between scientists and Members of the European Parliament (MEPs). The essence of this project is to establish a structured dialogue between scientists and policy-makers, with the aim to raise awareness about politically relevant, cutting-edge scientific issues and about the importance of science for evidence-informed policy-making. Eva Kaili MEP, STOA Vice-Chair, officially inaugurated the project on 15 September during the ‘Science Meets Parliaments‘ event in the EP.

In the 4th round of the scheme launched with an invitation for the expression of interest by scientists in May 2015, STOA established a list of 108 scientists and invited interested MEPs to choose their counterpart in an ‘MEP-scientist pair’. A total of 33 such pairs have been established and the names of the participating MEPs and scientists have been published on the STOA website. This number of pairs shows an encouraging overall evolution compared to previous editions of the scheme (in 2011 there were only 12 pairs).

Who is paired and what will they do?

Paired MEPs and scientists come from some 18 Member States, with the UK (8), Belgium (5) and Germany (5) the most represented among the scientists, and the UK (9), the Czech Republic (3), Ireland (3) and Italy (3) among the MEPs taking part. Most political groups are represented with at least one participating MEP, while, broadly speaking, the scientists selected by MEPs work mainly in the life-sciences. For the paired scientists, the gender balance is in favour of men (26 cf. 7); while among the participating MEPs there are more women than men (19 cf. 14).

From 25 to 27 January 2016 STOA will welcome the paired scientists to the European Parliament, where they will have an opportunity to present their research activities to their MEP counterparts and get acquainted with the work of the European Parliament’s research and communication services, as well as with parliamentary committees. They will finally, and most importantly, shadow their MEP counterparts in their daily activities, including in committee and political group meetings.

After this meeting in Brussels, MEP-scientist pairs are encouraged to organise a follow-up activity, such as a workshop, a visit to a research & innovation facility or an exhibition. The groups seem motivated to discover each other’s worlds. We look forward to seeing how the pairs will put the communication on the science-policy interface into practice.